Clora is a female character and is a quinary villain in Bingers.

Clora is selfish and overconfident and hates anyone who tries to get in her way. She has double personality, her alter ego "Ginger", is a kind alter-ego of Clora. Clora is a cold, unscrupulous person. She likes to tell her younger sisters, being the oldest of her sisters. Clora is only able to take control temporarily if she puts herself in situations that provoke strong negative emotions. She is also very insane, dark and unconcerned. She does not mind helping to save others, she thinks only of herself and would not sacrifice her life to save others, showing that she is very cruel. She's a psychopath.

Like Ginger, she is a very kind, happy and lucky person who loves to help others, but Clora hates her personality and Ginger's alter ego because she does everything to get away with her alter ego and her good side. Like Ginger, she is a professional fighter and has a deep adoration. She also does several antagonistic acts like Clora who is an antagonist, but Ginger quickly apologizes for her filthy acts she does. It is revealed that in the third season, Clora's alter ego, Ginger will no longer be good to become a bad and cruel alter-ego as is Clora. Ginger will be as damaging and stingy as Clora, who owns her alter ego and will be a bad character like her. Ginger is only a good personality that goes from the first to the second season, from the third Ginger becomes an antagonist. 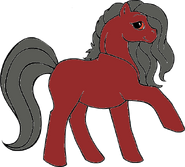 Ginger, the Clora's good alter ego.
Add a photo to this gallery
Retrieved from "https://zingers-gingers-bingers-mingers-villains.fandom.com/wiki/Clora?oldid=236"
Community content is available under CC-BY-SA unless otherwise noted.